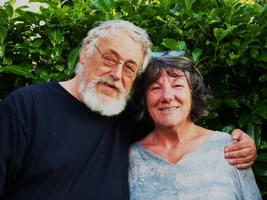 Annemiek was born in 1950 in Gouda, The Netherlands and was educated as a teacher physical education, a profession she has practiced till 1990. After finishing a study in information technology she started a career within the Dutch meteorological institute (KNMI). The last years she was responsible for the gathering of meteorological data for air traffic services and represented the KNMI both in European as well in global organizations. She retired in 2015.

Peter was born in 1945 in Utrecht, The Netherlands. He was educated to become a teacher in history, but never exercised that profession. He had a 37 year career in the banking industry, of which the last twenty years in administrative organization and information technology. He retired in 2005. From that moment on, more and more time could be spend on the collection, which he started in 1962.

We met in 1982 based on our common interest in the Balkan and its music. Together we made a lot of trips to the Balkan and Central European countries. Travelling by car to both new places as well places we have visited before individually by public transport. Annemiek is the driver during our trips that brought us as far as Western Turkey.

While travelling by car with my parents in the summer holidays we sang a lot. We shared the songs we learned at school with the songs our parents knew from their school camps in their youth. I especially loved the harmony of the canons. At least as long as we could keep the harmony!

I was not so good in singing. That became quite clear in the music school. But, singing together made me happy, was exciting and surprising! Making music with instruments was extremely challenging, but never fully satisfactory. So I made a choice for a study physical education and sports and became a teacher physical education.

During holidays I enjoyed travelling, meeting people, speaking other languages, discovering different cultural heritages and social changes in society. Interesting, and a reason for discussions! A nice memory is the summer of 1973 on the island of Hvar in former Yugoslavia. We discussed our life, shared songs and scores and it felt like an everlasting fun!

Yugoslavia had touched me. Back in The Netherlands I started a course Serbo-Croatian language and with the support of the University of Amsterdam I could follow language summer seminars in former Yugoslavia. Main course was language and literature, but at night the singing was the binding factor.

And then I fell in love with a collector traditional folk music.

He had already a huge collection and on holidays he travelled as a backpacker from city to city to enlarge this. On our first trip together we travelled by plane to Split in former Yugoslavia and backpacked by public transport to Greece. In every city on our trip we tried to find the record shops for new treasures. Then we sat down on a terrace for a beer or coffee and the just bought treasures were controlled. Reason: it could happen that the record was not in the right record sleeve! By doing so you had the change to return to the shop for the right one.

If we heard some music, we tried to find the origin. During weekends in the summer there was at least one wedding in every city or village. And “strangers” were invited for the wedding as they are signs for a lucky marriage. We loved the songs, the bands and the dances. Proudly they said, “this is our music!”

Travelling by car was a new dimension. By public transport we could visit only one monastery a day, by car we visited three! The route for the day was influenced by the information on the record sleeves of the collection. “I know a song from a band from Bizovac, that village is nearby. Let’s see what it is!”, Peter proposed. An example how we tried to get a picture of the influence of the countryside on the music.

Travelling by car had also the advantage of the possibility of buying more records and books. Be it that in Bulgaria, on leaving the country, you had to prove by the exchange receipts that the cost of your stay and what you had bought were in balance. If you had changed money on the black market or with friends, you easily ran out of this balance. When we crossed the border in 1984 between Vidin and Negotin in Serbia we were very “unbalanced”. So we had to do a lot of talking to the customs and border police that we had a lot of gifts from friends. Besides we had bought two books that the Bulgarians considered as antic. Export was forbidden without a declaration issued by the Ministry of Culture, which of course we did not have. Luckily for us the border police and the custom officer was not so good informed or trained and we “talked” ourselves out of the country.

On our return home we listened to the new scored trophies. Many Sunday mornings I had to undergo a quiz: “Do you know where this music is coming from?” That was a way to get familiar with the typical sound of a group of people playing their instruments and their way to express their feelings by singing and music making. Sometimes I could answer directly that the music was typical for that part of a country, many times it was not clear at all to me. The music, especially in the Balkan countries tells a lot about the turbulent history. People had to flee to find safer places, so they moved hundreds of kilometers, but no one could take their music from them away. The same situation happened to people who tried to find a new life in a new world; immigrants take their music with them. As a result of the Sunday morning quizzes I went for more details in the books on our book shelves.

Peter is a collector. Collectors need lists. Lists including what you have collected and what is on your wish list. A collector wishes to have it all, complete! He needs to know where to find the shops that could please him with new music. Before the digital era, own investigation, friends and colleague collectors were informants for that kind of shops. And even well informed, you learned that shops have their own folklore about opening hours. In the digital era the investigation and contact is mostly done at home. Much easier!

Peter is also the technical guy. He knows everything about storing, cleaning, digitizing the physical sources and administering the collection. That means, at home you can find him sitting in his room filled with music in front of his computer and for sure this situation shall continue, because there is still a lot to do!

I am a kind of an internet "terrier". The adrenaline runs if I discover new facts about a singer, an ensemble, a particular song, a specific festival or an item concerning cultural heritage. New information for us to discuss and to enjoy.

And secondly I am the one who takes the steps for new contacts and to hold the musical friendships. Because I love passionate people!