As you can read in the story about Dora Stratou, Esoteric Records recorded two records of the Dora Stratou Greek Dance Company during their tour in the United States:

Both records have the following introductory notes on the back of the cover, written by the Greek ethnomusicologist Fivos Anoyanakis.

Music is part of the national heritage, an heirloom treasured by the people of Greece since earliest times when the ancient Greeks entrusted the divine gift of Music into the hands of Apollo and when the Patron-Muse Terpsichore presided over their dances. Today music is still inseparable from Greek life. In dance and song the Greek gives dramatic expression to his joys and sorrows, records his hopes and history and stores his legends.

Considered as a whole, Greek folk music is a superb combination of elements of ancient Greek music—a theoretical basis of scales, and rhythmic forms—and oriental influences, fused together under the particular conditions of life in the Byzantine and post-Byzantine ages. It is, with few exceptions, entirely free in its native state from any Western characteristics. Such an exception is some of the music of the Ionian Islands lying between Italy to the west and the Greek mainland to the east. They received and successively assimilated all the life-giving streams of European thought and art, fashioning out of them their own particular Ionian Islands’ culture.

The modal and rhythmic characteristics of nearly all Greek folk music are largely unfamiliar to western ears. Times such as 7/8, 9/8 and 5/8, and scales employing intervals different to the ones we are used to the European majore and minore—(such as the tone interval between the 7th and 8th degree, the augmented second, or intervals of less than a semitone) account for the appeal of Greek folk music.

The folk dances of Greece, accompanied by music played on traditional instruments and frequently also with singing, are of two distinct kinds. The lively “pidiktos” and the restrained “syrtos” are the distinguishing measures of these two groups. Dances comprised of alternating pidiktos and syrtos measures constitute a third and derivative group.

The pidiktos, literally the “leaping” dance, was born on the rugged mountains of Greece and is appropriately danced by men alone. The syrtos or “dragging” dance, on the other hand is most frequently seen in the lowlands, coastal regions and the islands. Both men and women dance the syrtos.

The dances and songs of Pontos, an extensive tract of country along the southern shore of the Black Sea, claim an especial place of their own in Greek folk music, having a particular quality not to be found elsewhere. Some are lyrical, some dithyrambic and others, like the Serra, martial. The Serra, an exclusively Pontiac dance, has a pyrrhic theme leading up to a display of sword-fighting. There is a description of this dance in Homer's Iliad, in the lines describing the embossed decoration on Achilles’ shield.

Greek circular dances, the characteristic pattern of most national dances in the country, are often named after the place where they first developed into a recognized form or variation—thus Pelioritikos and Tsakonikos; or after a profession as in the case of “Hassapikos”, the Butcher’s dance, whose origin is to be sought in the Byzantine age. Finally, their names denote the category to which they belong, as the Klephtikos or Klephtic, that is, the warrior-patriots’ dance.

While in general the women dancers of Greece, according to an ancient habit, still dance “demurely and with downcast eyes”, the men in sharp contrast perform all manner of agile leaps and springs and turns, improvising complicated steps with an astonishing ingenuity and yet with absolute respect for the formal and rigid rhythms of Greek dance melody.

The musical instruments that provide accompaniment to the national dances and songs of Greece, and which can be heard on this Counterpoint recording, fall familiarly into three principal groups:

The lira is largely concerned with the music belonging to the Pontos or Black Sea area, to the islands of Crete and the Dodecanese; the cornemusa to the mainland provinces of Greece and certain islands; while the fiddle, clarinet and flute, frequently in association with the santouri comprise the instrumental group most widespread in the countryside.

THE ROYAL GREEK FESTIVAL COMPANY, under the High Patronage of H. M. Queen Frederika of the Hellenes made their American debut in early 1954 and were an astonishing success. With the exception of Dora Stratou, the Director of the Group, no member of “Panegyris” has had any musical education beyond that handed down from father to son. The result is that this music is performed as it was centuries ago.

By the many music critics who acclaimed the “Panegyris Troupe” the Greek form of art is considered to be “art with its pure soul.” The Baltimore SUN remarked, “One realises that Greece and her culture is not of the past but very much alive in the present!”

On the basis of further research we were able to find out the names of musicians who have played on the Esoteric recordings.

Side two
01 Macedonia
02 Crete
03 Roumeli and the Peloponnese 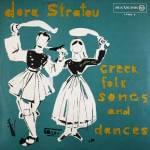 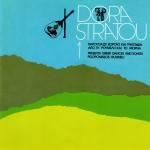 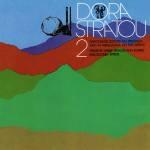 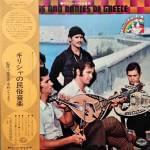 The last 10 records will be added in the next update.

Central Greece and a Sandouri Improvisation