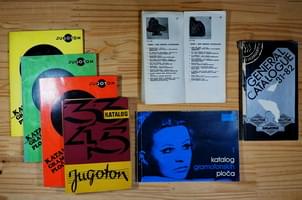 The collection started with the purchase of the first 7" record in May 1962. Upon hearing more and more traditional music from the Balkans, the interest grew more and more, resulting in trips to the Balkan countries from 1967 on. Every visit was used to buy as much interesting records as possible. In the sixties, seventies and eighties people got a growing interest in music of the World. Therefore, Western record producers started to publish records with traditional music as well.

The record industry changed at the end of the eighties from records to CDs. Nevertheless, there were in the Western countries interesting CDs published until World Music as a genre took over the scene around 2000. This also changed the publishing policy of the recording industry. In the Balkan countries traditional music was published for a somewhat longer period, but in the last ten to twenty years we see less interesting CDs of traditional music published and more and more “turbo folk” or alikes, which of course also has a place in the collection.

While the collection was growing, we thought that some kind of administration would be needed, be it to avoid buying albums that were already in the collection. A lot of records (especially in Romania and Bulgaria) were sold in non distinct and non descriptive covers. Every year a great effort had to be invested to compile by hand a list of the albums. The problem was partly solved by the start of the PC-era. In 1988 the first PC was bought and after two years it was possible to compile a list out of a dBase III+ program, later replaced by a Clipper program with the same database.

For some years this was adequate. After the break up of former Yugoslavia, travelling to the Balkan countries (by car) was no longer possible and the interest and trips shifted more to Central Europe. The need for compiling an overview decreased (no universal covers in that countries) and the database system fell into oblivion. Around the year 2000 the Balkan countries came back again in scope.

Around 1995 it became clear that digital registration would become the standard and a first start was made to digitize the collection. First on DAT tape and after a short period, when the price of CD-recordables became affordable, on CDR. Still there was no system or application to administer the collection in a proper way. This situation lasted till 2005, when Peter retired, more time could be invested in maintaining the collection. The first idea was to investigate which of the many programs on the internet for administration of music collections could serve our goal. The conclusion after a year of searching and testing was: none of these. All programs are album based and a track based program was needed. Album based programs had the possibility to store a lot of data related to the album, but very little related to the tracks (e.g. origin, ethnicity, etc.). So the final decision was made to develop and build a system ourselves.

In 2006/2007 a lot of effort was invested in research which would be the best programming tool and database. Thereafter time was needed for the design of the program and the database, and last but not least, writing the code for the program. At the same time we opt for the idea putting the content of the CDs on a server and digitizing the other sources for making the music easy accessible. Direct comparisons of various versions of songs or dances were then easy to accomplish and on the home network the collection would be accessible in every room in our home. In May 2008 the first version of the program was ready (which was by then focused on entering data) and the first CDs where placed on the server. After a couple of month's it became clear that one of the original principles (to produce a list to avoid buying albums that are already in the collection) would take to long time if al the relevant information from the sources had to be entered. Scanning these inlays with an OCR program, correcting and entering the data in the program is a very time consuming activity. This activity was then not supported by facilities that were later built in the program. To speed up the process, the tracks were not entered with the real name, but with a name consisting of label, number of the album and number of the track which could be done automatically. This applies to more than half of the CDs. Gradually adding track names of the already processed CDs will be completed. The records and compact cassettes are entered with the real track names from the beginning of the digitizing process.

During the last ten years many improvements of the program have been implemented, especially in the field of retrieving information. The possibility has been created to produce PDF files with all the physical sources (CDs, records, etc.) which can be loaded on a tablet and a mobile phone to satisfy the original idea from the eighties: a list which can be consulted in a shop to avoid buying an album that is already in the collection.